Wickersley stands close to the main road from Sheffield and Rotherham to Bawtry which was formerly an important inland port, exporting cutlery from Sheffield and lead from the Peak District. Originally the road ran south of the church, Morthen Rd, but when the road was turnpiked in 1759 it was diverted onto the present route. The turnpike (road) was also used for transporting Wickersley's main export - Wickersley stone.

In the 18th century the Wickersley stone was found to make excellent, fine-grained grindstones for which there was a great demand from the Sheffield cutlers. Land to the south of the village was purchased by the Cutlers' Company and a number of quarries were opened up. By 1800 some 5,000 stones were being sent to Sheffield and exported to Northern Europe and America each year. The Cutlers' Company sold the quarries in 1828 but production continued and around half of the male population of the parish were engaged in quarrying in the 1830s.

The 1871 Directory lists 28 quarry owners in the parish. Appropriately the local lodge of the Oddfellows, which met at the White Swan, was called the "Ouarryman's Pride". A very severe frost early in 1895 caused quarrying to be suspended and led to great hardship among the quarrymen's families. One of the first tasks of the newly elected parish council was to arrange relief for the families. With the opening of collieries at Canklow, Silverwood and Thurcroft, many quarrymen turned to mining as offering a more certain income. The demand for grindstones from the cutlery industry was declining as the use of emery wheels increased. The final nail in the coffin of natural grindstones was the passage of the Silicosis Act in 1914, although the outbreak of war delayed its implementation and it was not until 1927 that the cutlers finally abandoned natural stones. By 1939 there was only one quarry still producing grindstones for the export market. 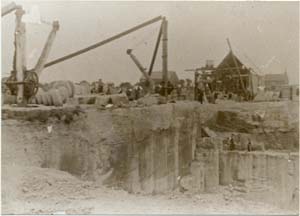 The production of 'Grindstones' was hugely important to Wickersley and a major contributor to its economic and social development.

The grindstone is a feature now embedded in the Parish Council logo and grindstones can be seen around Wickersley.

The saying 'Keep your nose to the grindstone' means to apply yourself conscientiously to your work, avoiding distractions.

There are two rival explanations as to the origin of this phrase.

One is that it comes from the supposed habit of millers who checked that the stones used for grinding cereal weren't overheating by putting their nose to the stone in order to smell any burning.

The other is that it comes from the practice of knife grinders when sharpening blades to bend over the stone, or even to lie flat on their fronts, with their faces near the grindstone in order to hold the blades against the stone. 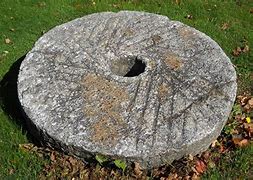 The sandstone grindstones were installed when the Parish Council landscaped the roundabout in order to ensure a lasting legacy of the industry for which Wickersley was renowned for over 200 years.Many older Wickersley residents will remember Wickersley crossroads /roundabout as the initial terminus, and turning round point for the Trolley Buses/ Traclasses. 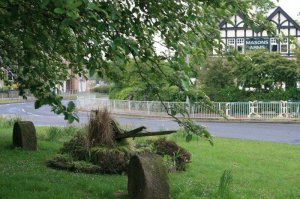