Skelton Conservation Area was designated in 1973. It includes The Green, Skelton Hall and Skelton Manor which form the historic core of the village.

Skelton was formerly in the ancient Forest of Galtres, but little is know of its early history. There are alternative theories about the origins of the name Skelton; but probably it came from the "farm near the River Skell", a river name that has not survived independently. The typical medieval pattern of "toft and croft" agriculture can still be traced in the long, narrow plot boundaries extending back from The Green. The village remained as mainly a farming community well into the 20c. At the turn of the century its population was 270 people. By 1951 the population of the village was still only about 480. However, subsequent expansion as a commuter settlement saw this figure rise to about 1600 people today.

The Church of St Giles (formerly known as All Saints) is a Grade I listed building, dating from c.1240, with restorations of 1814-18 by Henry Graham and 1863 by Ewan Christian. It was probably built by the masons of the south transept of York. Though small it is a foremost example of early 13c work in this region. The materials used are magnesium limestone and Westmoreland slate. Skelton Manor (Grade II* listing) has mid 16c origins, with major alterations from the early-mid 18c and late 19c. Vestigial timber framing was subsequently cased in brick and the roof is of plain tile. The interior is exceptionally well preserved and has been restored with very great care.

A combination of interesting topography and street pattern, varied building forms and a well-treed setting give Skelton its attractive distinctly rural, restful character. This is emphasised by its location just off the main A19 road, from which the virtues of the village are unsuspected. The village focal point is the Green; its undulating grassed mound and mature trees create almost a miniature landscape in its own right. The Green provides a setting for St Giles Church with its attractive railings. Across from the Church the open, grassed area continues to the south-east, past The Wheelhouse. An attractive terrace of 19c cottages flank the west side of The Green with, in contrast, individual properties set in their own, walled grounds opposite. This variety epitomises Skelton, yet unified by the trees, boundary walls and the use of natural building materials to create a natural "flow" from one part of the village to another.

A shady lane leads past the Church, where Skelton Hall is set in extensive landscaped grounds, with the stables and outbuildings converted into separates dwellings. The nearby Skelton Manor forms part of a "mews" and the conversions here and at the Hall have created two small intimate communities: part of, yet discreetly separate from the main village. Paddock areas provide their setting on the north side, with the open country side beyond.

Eastward from The Green, The Village (street) slopes quite sharply down hill, fringed by grass verges, hedges and boundary walls. Looking back the treed setting of the village, with buildings half-hidden, can be appreciated. More recent suburban style houses have been introduced along Church Lane. However, it is lined by trees and hedges, sufficient to maintain the country lane character. A row of cottages on Orchard View leads to Grange Farm, which contains the view along the street, before the latter turns into an area of suburban housing.

The main elements of the character and appearance of the area are:- 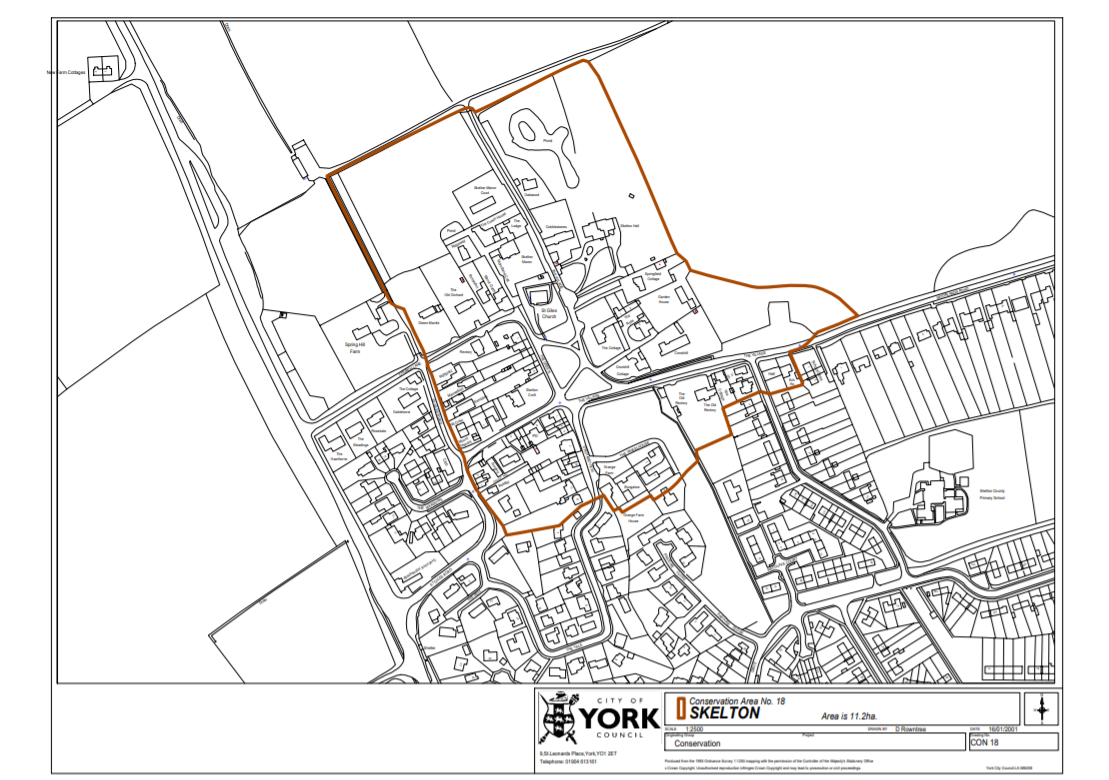 Please view the description and map on the City of York website.