Find out about Wookey Hole today: 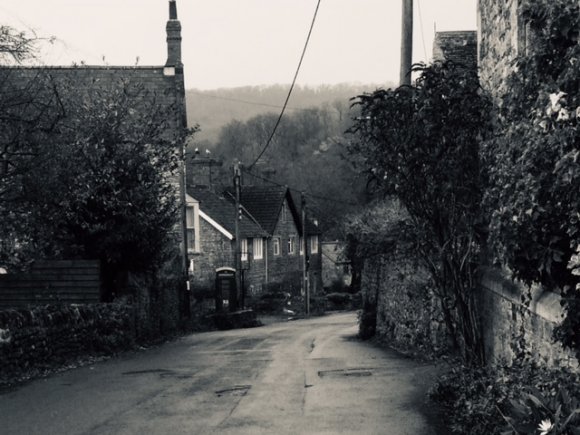 Looking towards the village from the old stores.

Wookey Hole and its caves have one of the longest continuously recorded histories in the British Isles. Wookey Hole is rightly famed for the manufacture of hand made paper and is a fine example of a complete industrialised village with its mill and housing for the employees all supplied by a benevolent employer - the Hodgkinson family. It is, however known world-wide for its Great Cave. Numerous writers throughout the ages have written of their experiences and fascination as they ventured into the chambers of the Great Cave. Their writings however come long after the cave's earliest inhabitants.

The area of Wookey Hole west of the river Axe was within the parish of Wookey until 1856. During the Middle Ages these lands were once part of the Bishop's estates of Wells. Other areas of land in Wookey Hole, both east and west of the Axe, belonged to the manor of Melsbury and Wookey Hole which was the local estate for the Almshouses of Wells (Bubwith).

The Church of St Mary Magdalene

As with many other major buildings in Wookey Hole, the Church stands picturesquely by the main road through the village. Simple in construction, its exterior conceals an internal beauty developed over many years. Before the Church was built the churchgoing villagers attended services at Wookey or Wells. Later, after being granted a licence by the Bishop, services were held at Wookey House and in the main hall of the new school.

Source: by kind permission of Mr Dave Hudsmith, author of 'Wookey Hole Past and Present'. Read more on the Village website.

WILD LIVE: Where next for nature and British Farming?