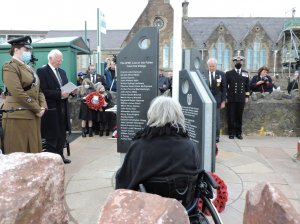 On Monday, 12th April, the Long Ashton Parish War Memorial was unveiled by Mrs Annie Maw, HM Lord Lieutenant of Somerset, who stepped into the breech when HRH the Princess Royal was forced to cancel at short notice following the sudden death of her father.

The date was chosen three years ago, when, during preparations for the 11.11.18 Armistice Commemorations, a scheme was established to provide a memorial to all the known Fallen, not just those listed in the churches and other locations in the parish.

If you look through the eye of the tallest panel, which lists the First World War casualties from the village, you will see the old school clock, where a lot of those named went to school.

Looking through the smallest panel with the Wilson family names listed, together with a picture of Orchard cottages, you will be looking down the valley, towards the spot where Mill cottages stood, before they were bombed on 12th April 1941, killing five inhabitants including three young children.

The view through the other eye looks towards the east, and if plotted on a map, will pass through Parsons Street Station. This was quite a surprise, as it was from Parsons Street Station that the Gloucester's " Bristol's Own Battalion" left for France in August 1914, having marched to the station from their camp at the White City, Ashton Gate.

Other panels list the Fallen from Leigh Woods, Second World War casualties from the Parish, and the Polish Airmen, killed when their Halifax bomber, LL126, crashed into the field behind the Parish Church on 21st November 1944. A casualty of the Bosnia conflict is listed below the Polish airmen. There is also a headstone, newly erected by a member of the Wilson Family, on the Wilson children's grave in the churchyard, which has been unmarked since their untimely death, eighty years ago.

The Trustees of the Long Ashton War Memorial Trust would like to thank all those people and organisations who contributed towards the cost of the War Memorial, and also to thank all the people who assisted in making the completion of the Memorial a reality, in particular David Addis for the time and effort he has dedicated to the project.

We also wish to thank all those who participated and attended the Dedication and Unveiling Event, and who helped us to comply with the COVID regulations with social spacing, which severely restricted the number of residents that could be directly involved in the ceremony.